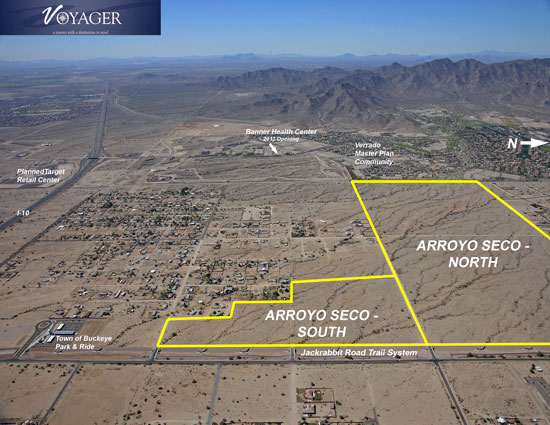 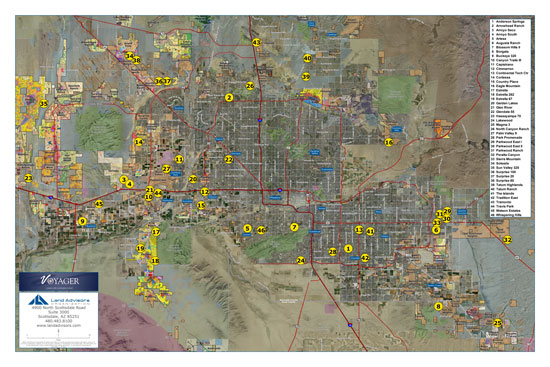 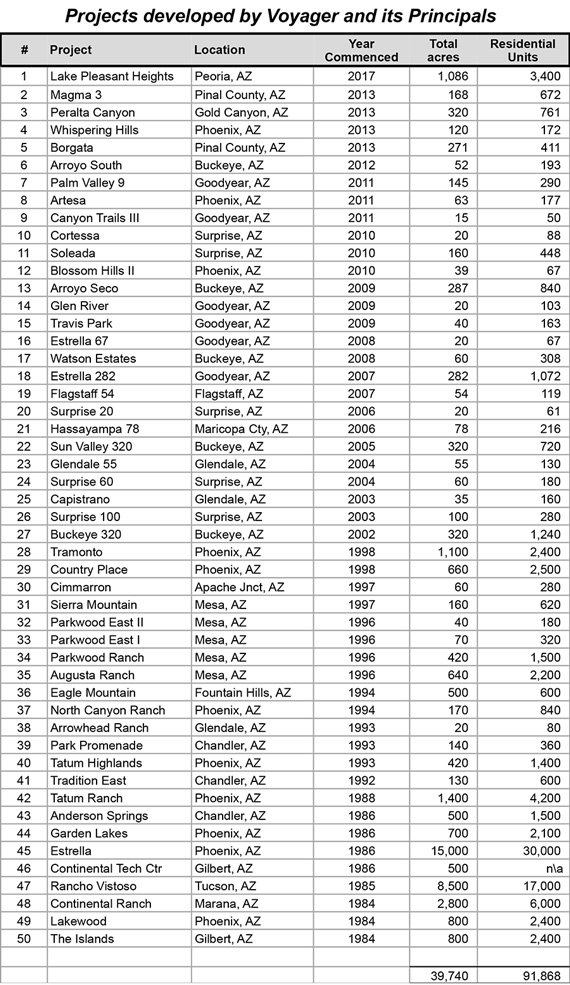 Borgata is a 270 acre proposed community in North Pinal County close to the southern boundary of Queen Creek, Arizona. Borgata is nestled on the side of the Goldmine Mountains and on the eastern boundary of the San Tan Regional Park with tremendous topographical variation throughout the project which will result in lot view premiums. When originally acquired by Voyager, Borgata was designed for 270 custom home lots. In today’s market, a large custom home subdivision has very little appeal to homebuilders and very slow absorption. Voyager saw an opportunity to reposition the project with higher density without sacrificing the project’s beauty or alienating the neighborhood or governing authorities. We have been able to increase density to 411 home sites which are mainly for production housing, thus improving both the profitability and velocity of the project.

Peralta is a 320 acre proposed community in the scenic Gold Canyon area of metropolitan Phoenix. Peralta has unbelievable vistas of the Superstition Mountains which will result in exceptional value for our homebuilder and its customers. Our acquisition strategy was to assist the lender during the foreclosure process in order to have first opportunity to purchase the land and then add value through improved engineering and economic utility solutions. Peralta contains a total of 761 home sites.

Whispering Hills is a 120 acre proposed community in Phoenix, Arizona in an area known as Laveen. Laveen is close to downtown Phoenix employment. Whispering Hills wraps around Carver Mountain and has stunning mountain views. As with the other projects under active development, we were able to acquire Whispering Hills from a lender. As originally conceived, Whispering Hills was another largely custom lot subdivision which has little appeal in today’s market. Similar to Borgata, we set about to work with the City and local residents to improve the project’s appeal while improving its fundamental economics through increasing density and decreasing lot size and development costs. Whispering Hills has 168 home sites.

Arroyo Seco is a 340 acre proposed community in Buckeye, Arizona next to the upscale master planned community known as Verrado. Although not on the mountain side as our other projects, Arroyo Seco has beautiful views of the White Tank Mountains. Arroyo Seco was purchased in the depth of the real estate market recession as a contrarian acquisition, when no one else was purchasing land. We expect to appeal a variety of home builder customers that are attracted to the area with its excellent school districts, amenities and new freeway construction.